Thank you for your patience while we retrieve your images.

Deep blue flirting with pigments of rugged stone…
The breathtaking Caldera, as in a picture from a famous postcard….

At the bay of Firostefani, on the stately rock that bridges the sky with the sea, the whitewashed figure of Mill Houses Studios & Suites looks like hovering over the mesmerizing cliff.

With a unique view to the volcano of Santorini – the symbol of power of a sea that historically united cultures – our hospitable unit seems entangled in an indiscernible dialogue with the mythical elements of the island. 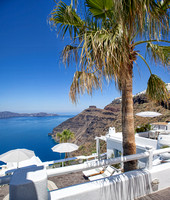